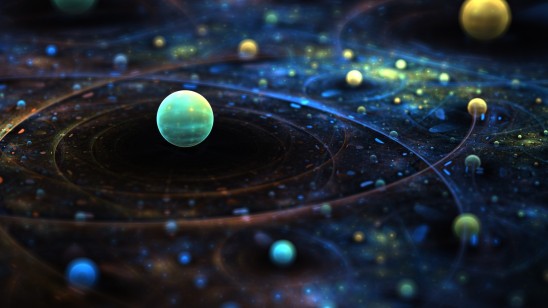 THE TRUE NATURE OF FATHER TIME

Chron-OmiTar twitched with annoyance at the insistent warning tingle in his awareness. Overlaying his temporal display onto his main sensors he evaluated his track again. There it was. The cause of the alert. A discrepancy between his current and his projected position on the grid of his route. A difference of eleven discrete temporal elements. He was annoyed because he was partially to blame for it. On the temporal display his next waypoint pulsed green. It located a small blue world in a minor star system within one of the smaller arms of the great spiral galaxy that was his domain. Automatically he re-calculated velocities, set a new trajectory and adjusted his progress, thinking about the species on that world he was tasked to protect. They were the youngest, a late addition to the long list of those he had minded over the eons past.

That was what he was. A minder of the great spiral known to the blue world entities as the Milky Way. He found the name quaint. In fact, he found much of their nomenclature amusing, having absorbed all their collective knowledge as part of his ongoing task. The galaxy was anything but milky from his perspective, although it might appear an opaque smudge to something viewing it from a world in that system.They called their system Sol, and he adopted this name too for convenience, although he knew the system by a different name.

He himself was a creation of the Originators, who fashioned him and others like him upon discovering viable seed intelligences in the far-flung star clusters of the universe. On those selected worlds they embedded twinned energy crystals far beneath one of the magnetic poles and aligned them to keep that world tilted in relation to its star. Thus they could bring about a regular cycle of seasons. Chron-OmiTar and his like were designed to monitor and maintain the energy crystals on all the seed worlds and assigned different sectors of space and time that never overlapped.

His designated sector was the Milky Way galaxy and his task was to make an infinite round of the seed worlds on that track, adjusting the alignment of their crystals once every solar cycle. Right now he was headed for a blue world in the Sol system whose inhabitants celebrated his arrival at an annual festival marking the end of their seasonal cycle, although they were unaware of his true nature. At the winter solstice marking his passage, they celebrated and paid their respects to Father Time, by which name they venerated him. But they could neither see him nor know him. Even though he could take their form if he willed it, it was forbidden. There was no bridge spanning the vast gulf separating his kind from those they minded.

Chron-OmiTar had never met another minder. The nature of their task and their appointed galactic routes ensured this. Often, he let the power of his considerable awareness roam free as he traversed his path, casting a wide net among the edges of the far-flung star clusters he passed by. In all his travels over the eons he never discovered any sign of another until his searching had become a matter of rote. But now, the unthinkable had happened. One of his random scans returned a faint disturbance in the flow of his awareness, so faint that he might have missed it, except it was not supposed to be there. A brush against a kindred intelligence somewhere out in the neighboring Andromeda galaxy, just two and a half million light years from his position. It lingered briefly and then disappeared in the background chatter in spite of his best efforts at triangulating it. In vain he bent the interstices of his track in space-time, trying to glimpse the path of the other. He could not maintain the singularity he created long enough to probe further and his manipulations caused his own path to warp dangerously, putting him out of sync with his appointed course.

His temporal display showed that the blue world was diverging from the path of synchronicity as it approached perihelion. He would have to summon all his resources to make up the lost time. Concentrating, he poured his energies into a new intercept vector, wondering about the consequences of a failure to make his rendezvous with the planet’s crystals. Such an event had never happened. Not in all the history of the minders. No relevant data existed in his awareness but Chron-OmiTar knew by extrapolation that such a failure would undo all his patient work of many cycles as the seasons failed and synchronicity disappeared. It would mean the eventual end of the unfortunate species in question.

Continuously re-calculating his velocity and trajectory, he approached Sol system’s heliopause, vaulting easily over the swarm of interstellar debris of the Kuiper Belt. In his haste he tracked closer to the gas giants than he had ever ventured, causing huge vortices of atmospheric disturbance from Neptune to Jupiter. Like a glowing comet he flashed across the dark between the blue world’s moon and the magnetic polar region, compressing his vast bulk as he entered the planet’s atmosphere. Burning like a fireball he burrowed beneath the crust to his reference point. There, before his gaze, the enormous energy crystals glowed, bright and fierce, already almost vertical in their alignment to each other. If they became squared off, synchronicity would be lost forever.

Putting out his thought he grappled with the crystals, fighting against their natural tendency to come together. He was aware of the music of the crystals, a vast cosmic melody, slowly changing as he fought against their entropy. Within him a counterpoint rose to meet that melody, striving to bring harmony to a growing discordance within it. The two themes strove against each other and feeling his awareness beginning to splinter, he redoubled his efforts. Fragmentation was not an option. Collecting himself he channeled all of his essence into his thought, forcing the twin pillars of light apart with the sheer force of his will.

The cost was staggering. Chron-OmiTar felt his energies drain as he willed the crystals back to their designated angles of separation. Time seemed to stand still as the bright fires slowly separated. Gradually the music in his awareness became more harmonious until finally the crystals regained synchronicity in a great burst of energy and light. Chron-OmiTar rode the energy wave out of the planet’s crust, moving out far above the plane of the ecliptic. Pausing there he floated gently in the enfolding dark, waiting for cosmic energy to replenish him as it always did. Every synchronicity event he generated left him momentarily weakened but this time he had come perilously close to absolute emptiness. It took a long time for his energies to renew.

When he recovered, he reached out with his awareness, probing the results of his actions. Below him, two globes spun in sync around their star, one glittering blue, the other dark, locked together in the beginning of a new star cycle. On the blue world, the seasons would continue. Turning back to his track he cued up his next waypoint, thinking about the event that had delayed him. Something seemed amiss with the cosmic balance of this part of the universe. He had always believed he was the sole minder in this sector of space but against the probabilities he had sensed another.
Andromeda was approaching. The Milky Way, his home, seemed destined for change. He computed that soon, maybe in just a few billion years their tracks would intersect. Chron-OmiTar would encounter another.